Paralititan was a large sauropod dinosaur that lived in North Africa from between 102-89 million years ago. 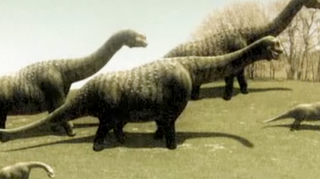 They were in the episode "Biggest Killer Dino" where they were prey for predators like Sarcosuchus, Rugops, Spinosaurus, and Carcharodontosaurus. The adults's sheer size which around 140-150 feet keep them safe from such predators but the young weren't so lucky. A baby gets killed by a Rugops which gets killed by a Spinosaurus. Then the Spinosaurus fights a pack of Rugops to eat a dead Paralititan. Paralititan probably is the largest animals in North Africa based on the known information. Usually the adults size are around in 140-150 feet, very few mighty male may capable of reaching lengths of one and a half of the usual adults. Their massive bulk places makes full-grown Paralititan well outside the weight class of almost all of the predators, but young are at risk from Spinosaurus and other large carnivores. And as the tallest herbivore on in the area, their long necks allow these sauropods to browse foliage as high as 60 feet or more above of the ground. While other midsized herbivores and smaller plant-eaters browse on smaller trees that are typically below 25 feet, thus each herbivore species avoids competing with each other for food.

Community content is available under CC-BY-SA unless otherwise noted.
Advertisement